Recognised for unorthodox patterns and a proactive approach, Stefan Sagmeister can be rightfully called a trendsetter in the design industry. Holding many alternative ideas on arts, the role of technology and the essence of the creative process, he shared some of these during our De Vorm Pod Session.


Stefan Sagmeister is a New York-based graphic designer and art director with Austrian roots. Working for the world-known stars like the Rolling Stones, the Talking Heads, Aerosmith, and Jay Z, he runs the creative agency Sagmeister & Walsh together with Jessica Walsh.

Stefan presented his exhibitions in New York, Vienna, Tokyo, Paris, Osaka, Seoul, and Zurich, among many other locations all over the world. The renowned “Happy Show” by Sagmeister became the most visited graphic design exhibit in history.

Having gained enormous popularity for his works in the music industry, (including two Grammys), the designer also speaks at global arts events and participates in all sorts of creative and social work. In 2016, he co-directed “The Happy Film”, a documentary premiered at Tribeca Film Festival. Notwithstanding a pretty packed schedule, he still finds time to teach at the School of Visual Arts in New York.

Stefan believes that technology provides a powerful boost to the world of arts. As he states himself, many projects that we can think of now, wouldn’t have been possible 15 years ago. Technological progress plays a crucial role here.

With that in mind, commercial projects can be of great value for designers. Such cooperation provides them with top-notch tools and resources, often hard to find in the art industry.

"Basically, any innovative direction in design came through technology."

However, Stefan notes, that it is never a one-way process, but rather an ongoing interchange, where a lot of work that designers do in the personal realm eventually influences their commercial projects as well.

"Ultimately, design is a language. It would be odd if we don’t use it in all directions."

Though he admits the positive impact of technological advances in the design industry, Stefan strongly believes that hi-tech shouldn’t be a substitute for personal touch. His own creations are intended to be emotional and human, manifesting that they come from a person and are made for a person.

"I always felt that the ideas that came out of modernism, namely, “design should be objective”, “there should not be a trace of the designer themselves”, “we should bring in the machine-like systems because it’s a new era” — all this stuff was interesting in 1920, but, by now, has lost all of its juice and became unbelievably boring and state."

Holding with the idea that automated technologies shouldn't replace real people, the designer finds it odd that nowadays, printed communication and online media often pretend that their work is made by a machine. It is definitely not the case in his studio.

"We are much more comfortable with the human-centric approach."

Designers are in constant search for inspiration. When asked about his source of fresh ideas, Stefan shared that they usually come during the change of scenery. Maybe, that’s why he truly enjoys working in an unconventional setting, often turning hotel rooms into creative studios.

"I actually find it more productive than in the studio simply because I get new impressions. Because I’m in a space far away from home where those impressions are possible."

Apart from hotels, Stefan finds it insightful to work on the way. Sometimes, he opts for a train trip in order to have more time travelling and refining his ideas. When preparing a to-do list for such cases, he would choose a cosy spot in the dining car and spend the whole journey there — observing the scenery passing by and thinking, working, thinking...

"I find that the combination of forward motion together with a landscape that flies by on the eye-level ideal. It is interesting enough to look at but not that interesting that it interrupts my continuous thought."

Regardless of the forward-thinking reputation, Stefan admits, that he has changed his mind about the importance of ‘brand-new’. At the beginning of his career, he strived for freshness and novelty in each and every work. Now he finds in-depthness far more valuable.

"The older I get, the less the new is important to me... As a listener, as a consumer or as a viewer, I’ve changed my mind on this. I used to hate Roy Lichtenstein, I couldn’t stand him. I used to think “My God, this one-trick pony, he came up with this idea to do comics and did it for the rest of his life.’’ To the point that we actually said “NO” to Lichtenstein books that we were supposed to design because I was just not interested. And, recently, I saw a Liechtenstein exhibit where he showed everything, from the sculptures to the sketches, to the paintings… just perfecting it, which I now very much appreciate."

The truly fascinating thing about Stefan, among many others, is his openness to the changes happening around and inside him. All these metamorphoses are reflected in his works, that constantly evolve to answer the reality without losing their distinctive style. And that’s what makes them timeless.

Pod Sessions is a series of interviews with prominent creators and thinkers of our time. They share their thoughts on workplace design, the essence of art and the creative process. The interviews take place in our Pod PET Felt Privacy Chair. 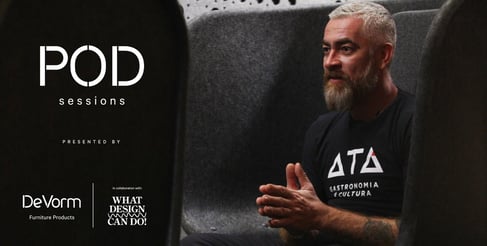 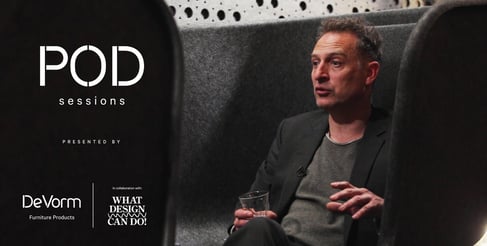 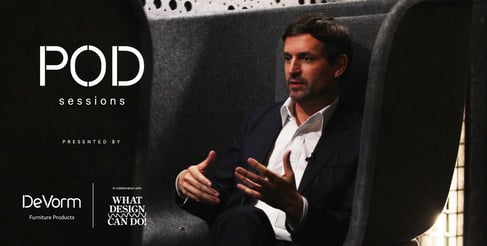